Personal Essays and Poems by Cathy A. E. Bell

A new essay has just been published in The Rumpus this morning!

I’m very excited to announce my latest essay publication in The Rumpus this morning.  It’s one of the shorter essays I’ve written, so it won’t take long to read. Thank you!

Mom sent my blue baby book to me once in an act of severance.  As I flipped through the musty pages I found where she recorded my first sentence:  “Momma, see!”

In Honor of Migraine Awareness Month, a poem.

When Light Pierces Through My Eyes Like Angry Tendrils

I am a vampire hiding
Hiding from sunlight,
Florescent light, light
Reflected on shiny things.
Even the little blue numbers
On the cable box display
Far across the room,
These are the things that hurt,
Seeking parts of my brain
I’d otherwise not know.

Scents coming through the air
Assault my brain like poison.
We afflicted cry out when
tiny molecules enter the nose:
Pumping gasoline
A woman who wears too much perfume
Car exhaust as the traffic light changes
(Please hurry)
Beautiful, beautiful lilies
Yeast in baking bread
And especially burning popcorn
Scorching in the microwave at work.
Ding.
These are the things that hurt.

Sirens screeching
Hail hitting the roof
Clank of a dish set in the metal
Kitchen sink, dryer buzzer buzzing
Children laughing, crying, singing
Sharp, biting barks (I love my dog, I do.)
Always the ticking clock
hanging on the bedroom wall.
Another tick. Another tock.
These are things that hurt.
These are the things that hurt me.

An incredible, short piece about Chronic Headaches from my good friend Lynn K. Hall.  This is one of the reasons we bond.  Charades. 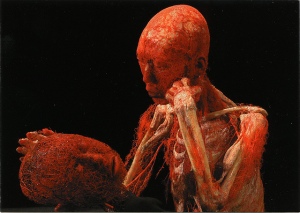 A postcard from the Body World Exhibit.

I estimate that at least eight years of my life have been stolen by wicked, sneaky migraines (if you add up all the minutes, hours, and days).  The poisoned feeling along with a pounding head first made its debilitating debut into my life in the fifth grade.  I was carted off to an eye exam because my teachers thought eye strain might be the cause.  It wasn’t.

I won Student of Month that year and was interviewed by my motherly teacher for the write-up and photo that hung in the hallway of the school. During the interview, Mrs. Lowe asked, “What is your biggest pet peeve?” I told her it was the headaches.  Always the headaches.

Later that year, our fifth grade class took a trip to Denver to visit museums, the Mint, and the magical Casa Bonita.  Since we came from a small, southeastern Colorado town, we stayed overnight at a school: girls slept in the library, boys in the gym.  While all the other girls were playing and having fun, I buried myself deep in my sleeping bag to keep out the light and noise. My savior, Mr. Nichols, our school principal, noticed I was sick and gently coaxed me out of my bag and took me by the hand to the cafeteria to get me a carton of milk.  In the dark and quiet of the cafeteria I felt better.

Migraines are my nemesis, my angst, forcing me against the grain of who I am.  I use up all fifteen sick days a year at work, plus some vacation, too.  What should be relaxing vacation time is spent, instead, lying in the dark with an ice-pack on my head chanting “Please go away.”   I feel embarrassed when I have to send the email to my boss and department saying I have to go home, again.  Often times, if I’m busy with important tasks, I’ll work through the migraine until I have things under control, and then I go home.  I’m lucky to have a compassionate supervisor and department head, who graciously accept this disabling disease of mine.  Many people who suffer with migraines aren’t so fortunate and suffer job loss.  Studies estimate the economic impact of migraine headache to be in the billions of dollars. I count my blessings.

The disease invades many systems in my body: nervous, circulatory, endocrine, muscular, and digestive. I’m not sure the medical community realizes it’s a systemic devil, but I know.  It took me 30 years to figure out that dysfunctional digestion is a huge factor in setting off a migraine.  Some theorize the body becomes toxic when foods aren’t properly digested or eliminated and that a full colon can cause pressure on the sympathetic nerve centers and on the cerebrospinal system. I don’t know for sure, but I do know my digestion problems are connected—and so are my hormones, blood-sugar, sleep patterns, the weather, and countless other things.  Like I said: It’s sneaky.

Those who have never had a migraine can’t imagine what they’re like. I understand. It’s impossible to know the bastard unless he’s ingested part of your life and invaded your body.  Anyone that’s ever had a migraine, though, even just once in childhood, understands. You don’t forget the misery, hopelessness, need for darkness and quiet, and time ticking past at a deathly slow rate while you beg for the symptoms to lessen–just a little.

I understand now that depression and chronic pain are very intertwined.  When I feel well, I love my life.  I can’t wait to read my latest book, talk to friends, work in the yard, clean up the house, and write.  But when I’m sick, and the for the day after–there’s always a migraine hang-over–the house remains messy, the dog un-walked, the books unread.  Daily chores are beyond my ability and interactions with people seem muted and cloudy. Food doesn’t sound good, either. Life just has a dull pallor to it.  All the little pleasures normally enjoyed are hidden away, out of reach.

But then, after the migraine leaves and the hang-over subsides, life is grand again.  I’ve learned to do everything I can when I feel well, so I won’t be stressed out when I’m sick. As much as I like to get things done, everything is put on hold when the migraine hits and that’s okay.  I’ve learned to take all the pressure off of myself when my head is pounding, and relax.

Once every couple of years or so, I’m desperate enough to seek medical help. Sadly, Migraineurs are sometimes perceived as drug-seekers.  I’m relieved Kaiser doesn’t treat me that way.  The nurses and doctors get me in quickly, turn down the lights, and give me an ice-pack without me saying a word.  Then they ask me what my usual cocktail is for relief. I say, “Demerol and Phenergan.” Soon I feel some relief from the intense pain and nausea, finally able to sleep when I get home.

Thankfully, the triptan drugs like Imitrex, give me reprieve much of the time. I’m not sure how I survived migraines before their invention.  Rarely do I use narcotics.  They make me sick (and exacerbate the digestive elimination problem).  That said: There is a time and place for the pain-killers—day nine of a migraine is one of those times.

Once, over a decade ago, I was denied pain-killers at an urgent care facility.  The nurse said, “Studies show that an I.V. with fluids and anti-nausea drugs are shown to be just as effective as narcotics.”  If I had been in a normal state of mind (another symptom of migraine is not being able to think or speak very well), I might have replied to the nurse, “That may be true when you first get a migraine, but when you’re on day nine of that migraine, you’re lucky if narcotics will even help.”  The whole scene created just one more layer of blame, guilt, and shame that forms tightly around the unbearable pain and sickness.  In my disbelief and feelings of helplessness, all I could do was cry and tell her to call my dad in from the waiting room.

Even at thirty years-old, I needed my dad to fight on my behalf that day. And he did.  He demanded to see the doctor. When the doctor denied me narcotics again, stating they didn’t even carry them in urgent care, my dad stood up and yelled, “Well, can you tell me what to do to help my daughter then?  If you people can’t help her with this pain, then tell me where to go or what to do!”  I hated witnessing his rage, but I needed him to funnel the anger I could never muster up for myself.  Even though I hadn’t told him I was suicidal, I think he knew.  His desperation and fear mirrored mine.

When someone is sick enough to go to the doctor over a migraine, every single blood-pounding moment is too much to bear.  The two hours I sat in the waiting room, hoping for relief, was seven thousand, two hundred blood-pounding seconds too long.  But I was willing to go through it all as long as I knew relief was coming; to be told relief wasn’t coming was heart-wrenching.

Finally, the doctor agreed to get morphine from the emergency room next door.  In the end, I felt a tiny bit better, and that was good enough. Mostly I felt defeated and just wanted to go to bed. Thankfully, that experience was rare and not the norm.  I learned after that to manage my pain better, curbing it any way I could before it got that severe.

I’ve certainly learned a few other things about migraines, too—things that make me feel better. One: I can’t cure myself. I do, however, look forward to menopause when many women report migraines subside greatly.  Two: It’s not my fault I have migraines.  Genetics can take some of the blame. Six genes have now been shown to contribute to the disease.  Three: A trigger is only a trigger sometimes, but if you pile on several triggers, you’re in trouble.  So, skipping a meal, not getting enough sleep, being premenstrual, and then trying to have a drink? Not a good idea.

In my quest for healing, I’ve tried 2 drugs from every classification of preventive medication.  Massage, chiropractor, Botox, colonics, thousands of acupuncture needles, changing my life habits…  And when those didn’t cure me, I tried the more spiritual side of things like praying to saints (begging might be more accurate), talking to psychics for any clues on how to manage them, and energy work.  Maybe one day I’ll even get some of the healing dirt from Chimayo, New Mexico.  Well, it can’t hurt, especially compared to the six inch acupuncture needles I’ve had in my head. And if all else fails, my plan is just to patiently wait for menopause. Growing older never sounded so good.